THE ECONOMY OF FRANCESCO 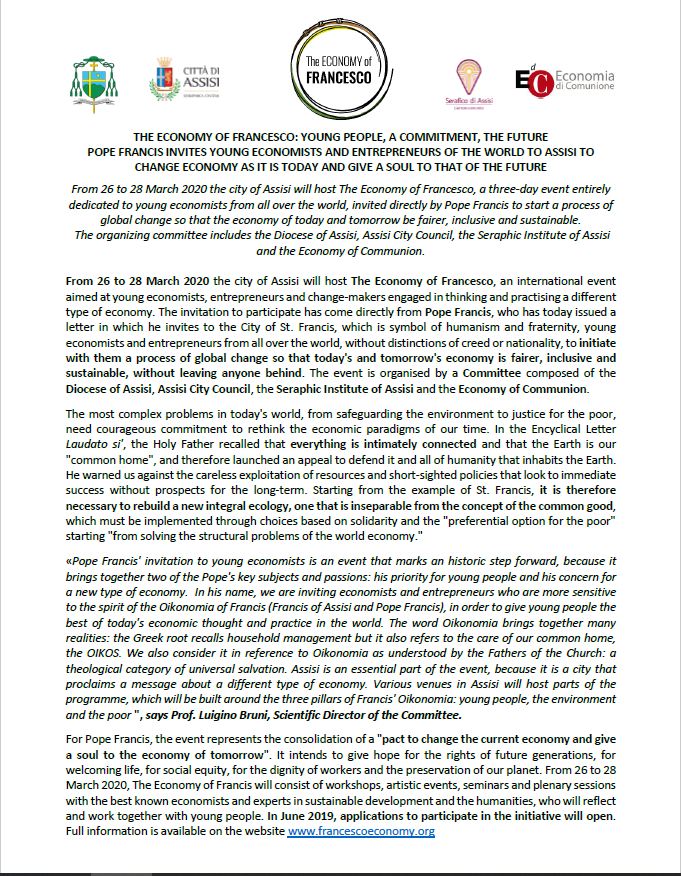 THE ECONOMY OF FRANCESCO: YOUNG PEOPLE, A COMMITMENT, THE FUTURE
POPE FRANCIS INVITES YOUNG ECONOMISTS AND ENTREPRENEURS OF THE WORLD TO ASSISI TO CHANGE ECONOMY AS IT IS TODAY AND GIVE A SOUL TO THAT OF THE FUTURE

From 26 to 28 March 2020 the city of Assisi will host The Economy of Francesco, a three-day event entirely dedicated to young economists from all over the world, invited directly by Pope Francis to start a process of global change so that the economy of today and tomorrow be fairer, inclusive and sustainable.
The organizing committee includes the Diocese of Assisi, Assisi City Council, the Seraphic Institute of Assisi and the Economy of Communion.

From 26 to 28 March 2020 the city of Assisi will host The Economy of Francesco, an international event aimed at young economists, entrepreneurs and change-makers engaged in thinking and practising a different type of economy. The invitation to participate has come directly from Pope Francis, who has today issued a letter in which he invites to the City of St. Francis, which is symbol of humanism and fraternity, young economists and entrepreneurs from all over the world, without distinctions of creed or nationality, to initiate with them a process of global change so that today’s and tomorrow’s economy is fairer, inclusive and sustainable, without leaving anyone behind. The event is organised by a Committee composed of the Diocese of Assisi, Assisi City Council, the Seraphic Institute of Assisi and the Economy of Communion.

The most complex problems in today’s world, from safeguarding the environment to justice for the poor, need courageous commitment to rethink the economic paradigms of our time. In the Encyclical Letter Laudato si’, the Holy Father recalled that everything is intimately connected and that the Earth is our “common home”, and therefore launched an appeal to defend it and all of humanity that inhabits the Earth. He warned us against the careless exploitation of resources and short-sighted policies that look to immediate success without prospects for the long-term. Starting from the example of St. Francis, it is therefore necessary to rebuild a new integral ecology, one that is inseparable from the concept of the common good, which must be implemented through choices based on solidarity and the “preferential option for the poor” starting “from solving the structural problems of the world economy.”

«Pope Francis’ invitation to young economists is an event that marks an historic step forward, because it brings together two of the Pope’s key subjects and passions: his priority for young people and his concern for a new type of economy. In his name, we are inviting economists and entrepreneurs who are more sensitive to the spirit of the Oikonomia of Francis (Francis of Assisi and Pope Francis), in order to give young people the best of today’s economic thought and practice in the world. The word Oikonomia brings together many realities: the Greek root recalls household management but it also refers to the care of our common home, the OIKOS. We also consider it in reference to Oikonomia as understood by the Fathers of the Church: a theological category of universal salvation. Assisi is an essential part of the event, because it is a city that proclaims a message about a different type of economy. Various venues in Assisi will host parts of the programme, which will be built around the three pillars of Francis’ Oikonomia: young people, the environment and the poor “, says Prof. Luigino Bruni, Scientific Director of the Committee.

For Pope Francis, the event represents the consolidation of a “pact to change the current economy and give a soul to the economy of tomorrow“. It intends to give hope for the rights of future generations, for welcoming life, for social equity, for the dignity of workers and the preservation of our planet. From 26 to 28 March 2020, The Economy of Francis will consist of workshops, artistic events, seminars and plenary sessions with the best known economists and experts in sustainable development and the humanities, who will reflect and work together with young people. In June 2019, applications to participate in the initiative will open. Full information is available on the website http://www.francescoeconomy.org